Among the specialty subsets of the 1973 Topps baseball set was a run of All-Time record holders. While issuing cards of long-retired legends is rather commonplace with today's baseball sets, they were still a leap of faith in 1973 because the kids who collected cards then weren't exactly thrilled to pull a black-and-white card of some old player they couldn't see play.Still, it was a great chance for young fans to learn about the rich history of the game. 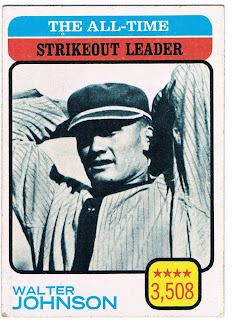 Card #478 -- Walter Johnson, All-Time Strikeout Leader
At the time this card appeared, Johnson had been out of baseball for 46 years and dead for 27. However, the record books still showed his stature as one of the game's best pitchers. While this card shows he was still the all-time strikeout king, he was the runner-up on the list of total victories and had the most shutouts. Walter Johnson was one of the five members of the first Hall of Fame induction class in 1936.

Johnson surpassed Cy Young as the all-time strikeout king in 1921, which meant that he had been the leader for more than half a century. The back of the card mentions the All-Time top 10 through '72. The only active player on the list was Bob Gibson, with 2,786. However, another decade would drastically rearrange that list. Johnson's record would fall when three pitchers surpassed him during the 1983 season. First, Steve Carlton surpassed his total, then Nolan Ryan and Gaylord Perry. After 62 years as the leader, Johnson was suddenly fourth. Today, he's ninth on the all-time list.
Posted by Chris Stufflestreet at 8:30 AM