Scattered throughout the 660 cards and five series of 1973 Topps baseball cards are pictures of each of the 24 teams then in the majors.

Here's one of those beloved teams: 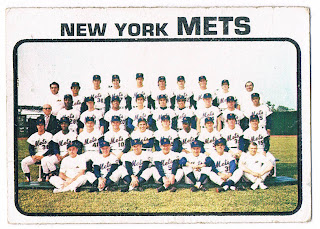 Card #389 - New York Mets Team Card
While the 1969 Mets were tagged as "The Miracle Mets" what the team did to reach the '73 World Series was even more miraculous. While some of the guys who won the '69 Series were still with the team (Seaver, Koosman, Harrelson, Grote, Kranepool, McGraw), it was still a different group of players with different strengths. Among the new faces were fresh faces like Jon Matlack and John Milner, as well as veterans like Rusty Staub, Ray Sadecki and Willie Mays. Gil Hodges, who managed the '69 team, had passed away in '72. Yogi Berra would take his place. He's very noticeable in the photo, right in the middle of the second row.

For much of the 1973 season, the Mets regained the role of underachievers their fans remembered from most of the 1960s. Beginning with a strong start and in first place after 20 games, some key injuries took their toll. By July 26, they were in last place in the National League East. On August they were 12 games below .500. With only 44 games left, it looked hopeless for the team. However, they went out and played like winners and played like they were on fire for the rest of the season. When they finally broke even (77-77), it was with a sweep of the Pirates that overtook them for first place. The team never let go of that top spot and finished 82-79. Despite the naysayers pointing out that they actually benefited from a weak division, that fact that they still won after being that far out is still a notable feat.

However, to get to the World Series, the team was going to have to get past the Cincinnati Reds. The Big Red Machine were winners of 99 games in '73, had been to two of the previous three Series and were loaded with talent. Playing their role as underdog well, the Mets took the series to the full five games and a dramatic sixth-inning rally won the final game. A game three brawl between Pete Rose and Buddy Harrelson underscored just how competitive the two teams were in the series.

After reaching the World Series in an unlikely fashion, the Mets managed to take a 3-2 lead against the defending champion Oakland A's but couldn't pull out another miracle. Despite losing the Series in seven games, the New York Mets were one of the best baseball stories of the entire 1973 season.
Posted by Chris Stufflestreet at 8:30 AM