Not to Be Forgotten

With this blog, I've often poked fun at some of the things that have appeared on 1973 Topps baseball cards. However, with some things, levity isn't appropriate. For instance, let's look at this card for a moment: 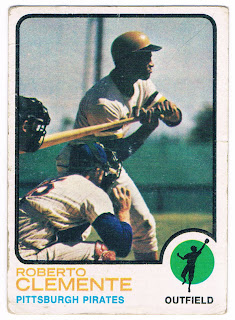 When Topps planned its first series of 1973 cards, it was right after the '72 season had ended. Clemente had just notched his 3,000th hit as a major league player and was already on a certain course toward his plaque in Cooperstown. Sadly, on December 31, 1972, fate intervened. While flying emergency supplies to victims of an earthquake in Managua, Nicaragua, the plane carrying Clemente crashed in the ocean near Puerto Rico shortly after takeoff.

Since the first series of Topps cards had been designed and Clemente had already been included, it was too late to pull his card or make an "In Memoriam" card like they did for Ken Hubbs in '64. As collectors pulled his card from wax packs that spring, they were sadly aware that Clemente was no longer around and that the list of statistics on the back seemed brutally final. It was similar to my own experience in '79 when a Thurman Munson card appeared in a pack I bought just days after his plane crash.

On March 20, 1973, a special election was held for the Baseball Hall of Fame after Clemente's five-year waiting period was waived. He was inducted that summer, the first Latin American player to be enshrined. His name and memory are still revered among baseball fans, and every year MLB's Roberto Clemente Award (originally known as the Commissioner's Award) is given to a player deemed to be an excellent citizen.
Posted by Chris Stufflestreet at 8:30 AM