While Topps' 1973 baseball card set was marked by a large number of game action shots, there were still photos used that had a player posing for the photographer. For instance, here's Jim "Catfish" Hunter in front of a completely empty stadium: 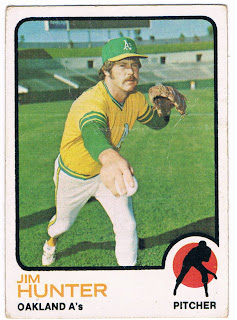 Card #235 -- Jim Hunter, Oakland A's
While Hunter obviously isn't playing in a game or in front of any fans, there's still a part of me that wishes I could tell him that it's okay to let go of the ball. Nobody's around to take it away.

Despite the photographic evidence of a balk, "Catfish" was in his peak years at the time this card was pulled from a wax wrapper along with nine others and a stick of gum. 1973 was the third of five consecutive seasons where he won 20+ games. His 21-5 record that year gave him a league-best .808 winning percentage, yet he also surrendered more homers (39) than any other American League pitcher in '73. He wasn't overpowering like Nolan Ryan; he didn't strike out a lot of batters but he didn't walk a whole lot of them either. Relying on pinpoint precision and control while on the mound, he was the undisputed ace of the World Series champion team.

There are several legends about why his nickname was "Catfish" and many are false. His nickname was given to him by Oakland owner Charley Finley after the boss decided his young pitcher needed a flashy identity. While Hunter wasn't exactly fond of the tag, it fit perfectly on a team that had other pitchers with nicknames like Blue Moon and real ones like Vida and Rollie. When the free agency era began in earnest, Hunter signed with the New York Yankees after the 1974 season and helped contribute to another three-year pennant winning team there before retiring after the '79 season.

While Hunter's overall record doesn't look like it's worthy of induction into the Hall of Fame, he was voted into the Cooperstown shrine in 1987. Though his era of dominance was rather short, he was one of the elite pitchers of baseball from 1971-'75. He pitched a perfect game and earned five World Series rings. Bothered by diabetes during his playing career, he began developing symptoms of ALS (Lou Gehrig's Disease) later in life and died on September 9, 1999 after falling down stairs at his home. He was 53 years old.
Posted by Chris Stufflestreet at 8:30 AM