In 1973, Willie Davis was a veteran player who had patrolled the Dodger centerfield for more than a decade. He had played in three World Series (winning two of them) and had been a speedy baserunner and dependable performer who rarely missed the chance to play. Worthy of respect, right?

Maybe not. Look at this shot: 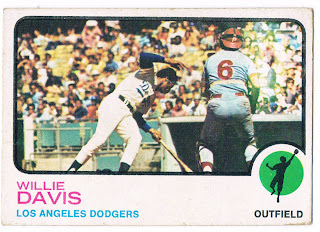 Card #35 -- Willie Davis, Los Angeles Dodgers
What did Willie do to somebody at Topps that deserved this? While brushbacks are a part of the game, what reason would somebody have to show somebody getting a close shave?

The catcher is either Tim McCarver or John Bateman, as both wore #6 for the Phillies in 1972 (and were traded for each other midway through the season). As a Dodger regular, determining which catcher would be tough. Since Davis is wearing his home uniform, it would depend on which '72 homestand against the Phils produced this photo. In the series from May 1-3, it would have been McCarver (who only caught the May 3rd contest). If it was the 3-game series of July 21-23, the catcher would be Bateman.

1973 would be the last year Davis played for the Dodgers. Traded to Montreal at the end of the season, he would go from team to team for the rest of his career, even coming out of retirement in '79 after two years away to give it one more shot with the California Angels.
Posted by Chris Stufflestreet at 8:30 AM