All through these entries, I've mentioned a number of times how Topps could be ridiculed for the choice of some of the game-action shots they used for their 1973 baseball cards. Here's one that may not seem all that great at first but eventually grew on me: 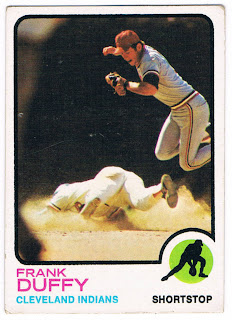 Card #376 -- Frank Duffy, Cleveland Indians
Against a dark background, Tribe shortstop Frank Duffy is jumping out of the way of a sliding Oriole baserunner. To the left of the picture, a small part of an umpire -- or another fielder -- begs the question about why Topps couldn't crop the photo or airbrush that out. As for the sliding Oriole, the image of eating the infield dirt or the too-ample gluteus maximus might not be overly appealing, but with dust spreading and Duffy leaping, this is actually a great shot when you look at it again. The darkened background gives the image a great contrast.

Duffy's playing career spanned the decade. From 1970-'79 he played for four different teams and at every infield position but will be best remembered as the Indians' regular shortstop from 1972-'77. He was an excellent fielder, which made up for the fact that he only hit .233 during his Tribe tenure. 1973 would be his finest season with the glove, leading the American League with a .986 fielding average.

The title is "Airborne!" because of the photo on the card, but perhaps "Semper Fi" would be a more appropriate expression. The back of Duffy's card features a cartoon explaining that he was a member of the U.S. Marine Corps. More specifically, it says he is a member of the U.S. Marines. Any leatherneck will tell you that there is no such thing as an ex-Marine.
Posted by Chris Stufflestreet at 8:30 AM