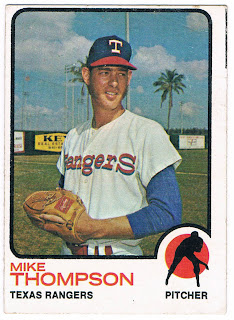 Card #564 -- Mike Thompson, Texas Rangers
The palm trees and signs in the background are obvious signs the picture was taken during spring training. While there are some spring training shots in the 1973 Topps baseball card set, most are regular season games from 1972 (and a small number from '71). However, the reason Topps used a posed spring training photo is spelled out on the back of Thompson's card: he spent the entire '72 season in Texas' AAA affiliate in Denver. His only major league experience had come in '71 when the Rangers were still known as the Washington Senators, so using a '71 photo would be impossible without giving more work to the airbrush artists.

Interestingly, Thompson never played a major league game in a Texas Rangers uniform. When this card was making its way into packs midway through the summer, he was playing in St. Louis after being sent there as the "player to be named later" from a deal made before the '73 season began. He would appear in two games for the Cardinals late that season but not getting any decisions. In the first game, he started but was pulled from the game without retiring a single batter.

On the back of the card, there's a short description of Thompson's first (and at that time, only) victory during his '71 tour with the Senators. Looking at Thompson's lifetime stats shows that it would remain his only win despite several tries through 1975. He ended up with a 1-16 lifetime record. This card would be Thompson's first appearance in a Topps set; he managed to appear on another in 1976 but had already played his final big league game by then.
Posted by Chris Stufflestreet at 8:30 AM