Not Leaving in a "Hough"

Some stay, some don't. Some hold on for what seems like forever while others come and go. That's the way it is with pitching prospects. Whether it can be attributed to overuse, less attention to pitch counts back then or whatever, hurlers are often the hardest players to gauge future potential. Take the three guys: 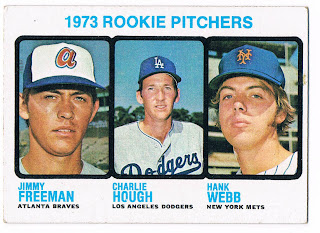 Card #610 -- 1973 Rookie Pitchers
Among these three players, two were actually making their first appearance on a Topps card.

For Jimmy Freeman, this would be his only Topps card. Brought up at the end of the 1972 season when the Braves expanded to a 40-man roster, he went 2-2 in six starts but had a high ERA. He would begin '73 at Richmond for further development and was brought back up to the majors in June for another chance. Unfortunately, he was sent back down after July and never returned to the majors.

Charlie Hough (pronounced "Huff") had already appeared on a '72 Topps card but would be around for many more. A reliever with the Dodgers who was converted to a starter once he went to Texas in 1980, he was known for a nasty knuckleball delivery. He would pitch in 25 seasons before retiring with the Florida Marlins in 1994. He and Rich Gossage were perhaps the last two active players from the 1973 Topps set in the majors.

Shown on the first of three Topps cards through '76, Hank Webb only pitched in two major league contests during 1973. After shuttling between the Mets and their AAA club at Tidewater for the next two seasons, he finally got the chance to join the Mets' starting rotation in '75. He didn't work out, however. He would finish his major league career with a short stint for the Los Angeles Dodgers in late '77. The first game he pitched for the Dodgers that year, he was relieved on the mound by Charlie Hough.
Posted by Chris Stufflestreet at 8:30 AM