Three New Yorkers and an Iowan...

While that sounds like the beginning of a joke, the coaching staff shown on this card consists of three native New Yorkers (Manhattan, Brooklyn and Buffalo) and one from Keokuk, Iowa: 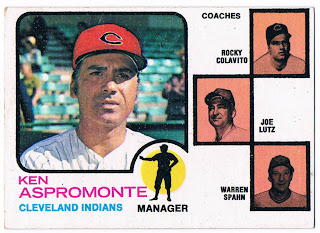 There are some familiar faces on the card. Aspromonte had been a player during the late 1950s and early 1960s, but Warren Spahn and Rocky Colavito were stars of the same era. The younger collectors of 1973 may not have known the names, but their older brothers and fathers were certainly familiar with them.

Brooklyn-born Ken Aspromonte played for seven different major league teams between 1957 and 1963. His younger brother Bob was a player during the same period. Among the teams was the Cleveland Indians, a team he would manage between 1972 and '74. After his third straight losing season, he was fired and never managed another team. Aspromonte's cap on this card is airbrushed, despite having managed the Tribe in '72. It appears the shirt in the picture is the Indians' 1971 home jersey, which means his cap would have been blue in the original photo.

New York City native Rocky Colavito played from 1955 and '68 and began his career with the Tribe, where he was a fan favorite. He was known to be a long ball threat, with eleven consecutive 20-homer seasons. After being traded to Detroit in 1960, he was popular enough to be brought back to Cleveland five years later.

While Colavito was very good, Warren Spahn was a Hall of Fame pitcher. One of the finest left-handers the game has known, he won more games (363) than any pitcher since 1930. His career began in Boston, where fans were known to chant, "Spahn and Sain, then pray for rain." Moving with the Braves to Milwaukee, he was perhaps the best overall pitcher of the 1950s and seemed to get better with time. He led the National League in victories each season from age 37 through 40 and tossed no-hitters at 39 and 40. Spahn finally retired at 44 and passed away in 2003.

The one coach many fans didn't recognize was Joe Lutz. Despite a short stint with the St. Louis Browns in 1951, he went on to become the first foreign-born manager in the Japanese professional baseball league in 1974. Lutz passed away in 2008.
Posted by Chris Stufflestreet at 8:30 AM