Stop and Look at These Numbers For a Moment

Here's a glimpse into a different era: 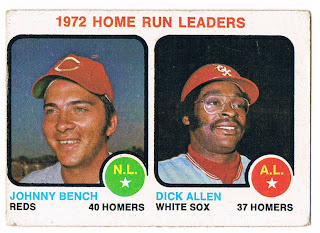 Card #62 -- 1972 Home Run Leaders
It seemed like only a few years ago this card was a wonder to behold. In the wake of an increased number of home runs, it seemed odd to see that somebody could actually lead a league with 37 or 40 of them. And this wasn't a "live ball" era drought...Graig Nettles managed to win the A.L. home run title in 1976 when he hit 32, without anything holding him back like a strike or adjustments to the pitcher's mound. In fact, nobody in the American League could get 40 dingers in any season from 1971-'78, even with the introduction of the designated hitter. That's a big difference from the gaudy home run totals we saw between 1987 and 2007 (when MLB stopped looking away from alleged steroid activities).

Thanks in part to their home run totals, both Bench and Allen were named league MVPs for 1972, which meant they would be joined together again on a 1975 Topps card (the link is to another blog covering one specific Topps Set...Night Owl's great '75 blog).
Posted by Chris Stufflestreet at 8:30 AM