Since 1962, Topps made cards of multiple players as a way of spotlighting new (and unproven) talent. For its first multiplayer "rookie" card (Rookie Parade, 1962), the cards were grouped together at the end of the set. After that, the rookies -- shown 2 to 4 players at a time -- would be disbursed throughout the set, usually grouped by team by occasionally by position. For 1973, Topps returned to the idea of having the cards run consecutively in their final series. 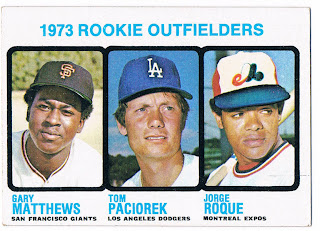 Card #606 - 1973 Rookie Outfielders
Calling these guys "Rookie Stars" wasn't always accurate. Of the trio, only Matthews was making his first appearance on a Topps card. Paciorek had been on a 1971 card, and Roque's first card was printed in '72. Those cards were also multiplayer "rookie" cards.

Two of the guys shown would play well into the 1980s. Mathews would be named the National League Rookie of the Year in '73 and would later be a sparkplug and fan favorite. Nicknamed "Sarge," he would be a tremendous veteran presence on the 1984 Chicago Cubs team hat made the postseason for the first time in nearly 40 years. He would later become a coach, a color analyst for the Phillies and father of a future major leaguer. Gary Matthews, Jr. is still active as of this writing, playing for the New York Mets.

1973 was Tom Paciorek's first significant season in the big leagues after some short tryouts the previous three seasons. Beginning as a fourth outfielder and utility player in L.A., he went on to become a platoon player in Atlanta and Seattle. Becoming an everyday player in the strike-shortened '81 season, he had a career year but -- Seattle being the way it was -- was promptly dealt to the White Sox. He would return to his platoon/utility role until he retired in '87.

As for Roque, he really wasn't a rookie after spending part of the 1970-'72 seasons with St. Louis, but was traded to Montreal (note the poorly airbrushed cap) for Tim McCarver. Despite playing almost regularly as the Expos' centerfielder at the start of the season, he played his final game on May 15, 1973. He was sent to the Expos' AAA club for the rest of the season and never again played organized ball.
Posted by Chris Stufflestreet at 8:30 AM