Considering Match Game was one of the most popular game shows of 1973, might as well give it a tip of the hat in the title.

In a week of firsts, might as well continue the string. Monday, I showed my first blue-bordered checklist. The first active Yankees player appeared on Wednesday. Today, I show my first catcher: 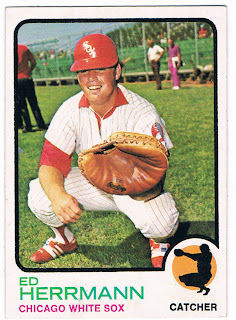 Card #73 -- Ed Herrmann, Chicago White Sox
Just look at the size of the glove he's wearing. It looks huge. While obviously an optical illusion caused by the two-dimensional nature of photography and the angle of the camera, it still looks like the mitt is big enough to catch anything Wilbur Wood or Stan Bahnsen tossed his way and with enough padding to keep his hand from hurting when Rich Gossage was on the mound.

According to Baseball-Reference.com, Herrmann was among the league leaders at his position in 1973. He was among the Top 5 catchers in games played, putouts and assists. However, he also led the league in passed balls (so much for the size of his glove) and stolen bases against him.

Searching for information on Herrmann is a little complicated because there is an award-winning actor named Edward Herrmann. However, this Ed Herrmann was the grandson of Marty Herrmann, who pitched the final inning for the Brooklyn Robins on July 10, 1918, facing four batters and only allowing one walk.

Herrmann was sold to the New York Yankees in 1975 to DH and back up Thurman Munson. In return, the White Sox received cash and four players, none of whom ever made it past the minors. That season was followed up by stops in California, Houston and Montreal before he was released in 1978.
Posted by Chris Stufflestreet at 8:30 AM