He "Brooks" No Aggression at Third

In some of my earlier posts, I've had a little fun with the odd choices Topps made when they decided which images to use in 1973. I will say this much, however, the choices used for the Oriole infielders were very good. While it's hard to think that there could be a bad picture of Brooks Robinson (well, except for the one used on his '58 Topps card) but this is a guy who deserved to have some more action in his shot: 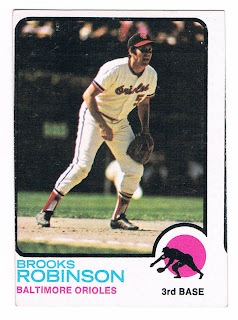 Card #90 - Brooks Robinson, Baltimore Orioles
Seriously...the photos taken for this set were only a couple of years removed from one of the most spectacular displays of defensive ability during the postseason. By winning the 1970 World Series MVP by merely breaking several Reds potential rallies with almost superhuman snags at third base, Robinson virtually assured himself of his place in Cooperstown (not that there was a lot of doubt about it, but that performance cinched it) even if he'd retired after that season. Fortunately for O's fans, he would stick around until 1977.

While the picture here isn't bad, Brooks Robinson really deserved to have a horizontal action shot showing him reaching out to stop a solid liner at third.
Posted by Chris Stufflestreet at 8:30 AM