Despite using more action photos for its 1973 baseball card set, occasionally Topps would revert to its old form and show a posed shot. Here's one of them: 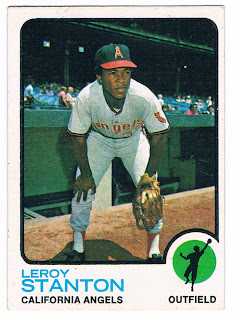 Card #18 -- Leroy Stanton, California Angels
While it's good to look like you're waiting for your pitcher to make his delivery, perhaps standing next to the dugout isn't exactly wise. After all, if the batter hits the ball to him, it's foul anyway, and if he runs to the right he may fall.

While that seems like a rookie mistake, Stanton had been in the majors since 1970. After a couple of years with the Mets, he was one of four players traded to California in exchange for Jim Fregosi. Since one of the other players given up was Nolan Ryan, it's remembered as one of the worst blunders the Mets have made (admittedly, a long list...but I digress). During his five seasons in the Angels outfield he made a name as a steady and dependable if not necessarily outstanding player. On July 10, 1973 he would launch three home runs against the Orioles. The third blast was a 10th inning score that would be the game-winning hit. Amazingly, those three homers in one day were more than what Stanton had accumulated up to that point (he ended the season with 8 round-trippers).

After being selected by the Seattle Mariners in the 1976 Expansion Draft, Stanton would finish his career there in 1978. His last regular Topps card was among the ones I pulled from some of my first wax packs in 1979.
Posted by Chris Stufflestreet at 8:30 AM