Since beginning this blog, I've shown several cards and told quite a few stories, but it came to my attention that I have missed showing any Yankee players. That made me think...I mentioned Thurman Munson, but that was on Terry Crowley's card. Billy Martin's been here as well but as a Tigers manager. Lou Gehrig has been featured, but he was one of the All-Time Record Holders.

So, that's right, I haven't yet actually featured a current Yankee player from 1973. That changes today: 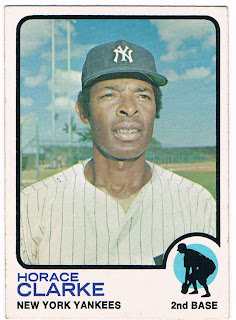 Card #198 - Horace Clarke, New York Yankees
While having an era of your team's history named after a player can be quite an honor, in Horace Clarke's case it's not very flattering. Starting at shortstop and then moving to second when Bobby Richardson retired, he was a regular player during a long stretch of time where the Yankees weren't quite the dynasty they had been for four decades. In fact, the pennants dried up after 1964, the year before Clarke played his first game in pinstripes. When the Yankees finally returned to the postseason in 1976, Horace Clarke had already left the team. Therefore, this 12-year "dark period" in Yankee history is sometimes called The Horace Clarke Era by fans.

But don't let that little fact sway your opinion of Clarke. Clarke wasn't at fault for an anemic Yankees team; the fact of the matter was that the New York Yankees were bought by CBS after they lost the 1964 World Series. Between its new corporate ownership, aging of the stars who'd been such great performers in the past, the arrival of the major league draft (instead of the individual contracts worked out before 1965) all mixed to compound the team's bad luck.

While Horace Clarke wasn't necessarily gifted with a bat, he still managed to break up three no-hitter bid during the ninth inning in a four-week span in 1970. Despite being tagged as a fielder afraid to turn a double play in fear of being spiked (even though he was rarely knocked down on those plays), he was good enough to be a major league starter for several years. Roy White said he was the type of player who was always ready to take the field. The Yankees may have been underachievers during his tenure there, but it wasn't because of him. It's merely unfortunate that they weren't really competitive again until 1974, the same year Clarke was sold to San Diego.

Horace Clarke was also one of a handful of major leaguers coming from the U.S. Virgin Islands. Among all Virgin Islanders who've played in the majors, Clarke has played in more games than any other.
Posted by Chris Stufflestreet at 8:30 AM