How old was Willie Mays in 1973? From the looks of the card below, he was pretty ragged: 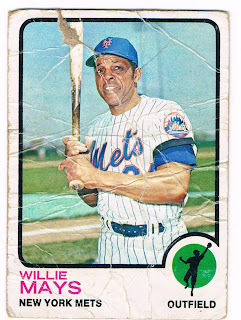 Card #305 - Willie Mays, New York Mets
While many of the big-name stars from my 1973 set are in sore need of upgrading, somehow this card does a fairly good job of showing that Mays had lost a few steps since his days as a speedy centerfielder. But that's okay, because age happens to all of us as surely as it did to the Say Hey Kid. Though sometimes cruel and unfair, it's a fact of life.

With this 1973 card, Willie Mays would be the final active player who'd been included in the 1952 Topps set. He wasn't the only player from that set found here by far: Billy Martin, Eddie Matthews, Ralph Houk, Warren Spahn, Whitey Lockman, Yogi Berra and others would appear on manager and coach cards, but with Hoyt Wilhelm's retirement Willie was the last player still filling a roster spot.

1973 would be Willie's final season. He would finish his major league career right where it started, in The Big Apple. While the uniform name and colors were different, he would wear the same "NY" logo he once sported at the Polo Grounds before the Giants decided to move West. He would go out on a high note, appearing in his fourth World Series. His plaque at Cooperstown already had a place and was made official in 1979 when he finally became eligible.

Despite the realities of advancing age...as long as the film exists of Mays' catch of Vic Wertz's long shot in the 1954 Series and his pinpoint-accurate throw to home while spinning on one leg, he'll always be remembered as young and fast.
Posted by Chris Stufflestreet at 8:30 AM