I get it. When players get traded, Topps didn't always have a current photo to use on a player's card. In those instances, having an artist airbrush an old photo to reflect a new team makes logical sense: it's less expensive, more efficient and highly expedient. However, they sometimes forgot to do a thorough job. 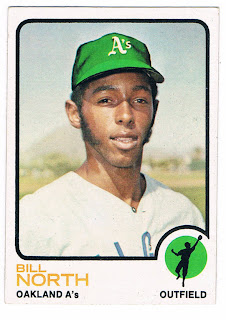 Card #234, Bill North, Oakland A's
It's quite obvious that North's cap has been painted on, but could the artist have taken another few minutes and removed the rest of the "Chicago" from his chest? If the time was too tight, could the person who used the photo have just cropped that out?

North had been traded to the A's in November '72. Becoming the team's regular centerfielder that year, he oddly didn't play in that year's World Series. Known as a speedy runner, he would be among the league's leaders in stolen bases; however, he also was among the league's leaders in times caught stealing. He would remain with the A's until 1978 when he was traded to the Dodgers. One of the last people to wear Duke Snider's old number before it was retired, he played in one more World Series that year and finished out his career in San Francisco in 1981.
Posted by Chris Stufflestreet at 8:30 AM