As I'm going through the cards from Topps' 1973 baseball card set, I'm trying to make sure I  touch all the bases when it comes to the many different types of cards the company placed in its sets.

Another one of Topps' running traditions was the All-Star Rookie team. Every year since 1960, standout rookie players had a trophy placed on their cards. For 1973, the award underwent a major change. Since Buddy Bell was the first member of the team to appear in the set, he's a very good player to point out the change: 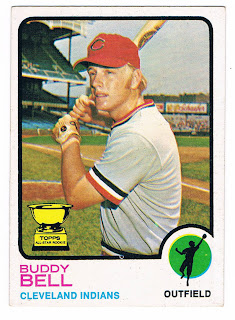 Card #31 - Buddy Bell, Cleveland Indians
From its inception in 1960, the graphic depiction of the trophy had a batter swinging on a top hat. Look at the one used on Thurman Munson's 1971 Topps card:

For 1973, the "award" was shown as a golden cup. Also, the year had been removed from the award, perhaps as a way of keeping the template "current" and not having to change the date every year. Here's a closer look at the one on Bell's card: 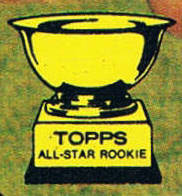 Perhaps the Topps braintrust had decided the old design had become stale, or perhaps the batter no longer fit since American League pitchers were no longer going to the plate. Since the old award was taller, perhaps it was changed to allow less of the player to be obscured, especially on horizontal cards.


In any case, the award would have another interesting development in '74...they were left out of the set entirely. Returning from '75-'78, the award was dropped again altogether. I didn't actually begin collecting baseball cards until 1979, so I never knew until a few years later about what I'd call "trophy cards." I felt cheated about that, as if some executive specifically singled me out. The eventual return of the subset in 1987 didn't ease that feeling one bit.


Interestingly, Buddy Bell was still an everyday player when those 1987 Topps cards came out. Beginning with Cleveland, he'd play in Texas (where he appeared on many cards during my formative collecting years), Houston and Cincinnati, where his own father had played during the 1950s and '60s. Not only was he the son of an ex-big leaguer, two of his own sons would go on to play in the majors too. Bell spent 16 years as a regular, and I always thought he was good by virtue of him running out on the field every day. He would also go on to manage three teams over nine different seasons, but only once finished with a winning record.
Posted by Chris Stufflestreet at 8:30 AM