Since 1956, Topps had been printing checklists. For their first two years, checklists were additional cards included as "extra" material in its wax packs. In 1958, they found their way onto the backs of team cards and became numbered cards inside the set by 1961. However, up to that point they had always been numerical lists of players, except for a short-lived alphabetical checklist during one series in 1958.

While the checklist cards were helpul for set collectors, what did you do if you happened to be a team collector? In 1973, Topps had a solution: 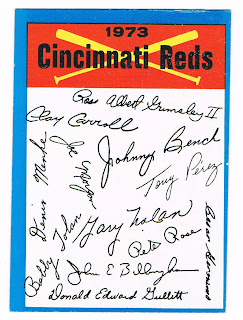 (No Number) - Cincinnati Reds Checklist
In its final series wax packs for 1973, these blue-bordered cards were inserted along with the other 660 cards of the set. While it is a reminder of the last year Topps released its sets in series (well, the last year they released series the way they did beginning in the 1950s), the checklist cards are a lot harder to find than the red-bordered checklists of 1974. Those were inserted into wax packs throughout the year.

Of the twelve player autographs shown on the front, it gets most of the Reds' 1973 starters (although Dave Concepcion is conspicuously missing). The reason I chose the Reds card to show here today has nothing to do with the star power. It's actually one of the few that I own without marks on the back: 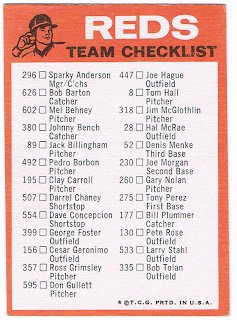 The back shows a list of every player from the team who appeared in the '73 Topps set. From the list of players on the back, it shows not only the regular players but any players appearing on multiplayer rookie cards and the team manager as well. By 1975, Topps combined the team checklists and manager cards with team cards, placing a team checklist on the backs of team cards and mentioning the skipper.

One last thing you may not have even realized...see the asterisk at the bottom of the card? When printing pages were set up, Topps used asterisks to denote where on the sheet that particular card resided. Every 1973 (and 1974) team checklist is found with either one or two asterisks. Some collectors try to get each variation, but I'm happy with one.
Posted by Chris Stufflestreet at 8:30 AM