Today is Memorial Day, which really should be a day where we stop and remember the sacrifices often called upon some of our fellow citizens in the name of preserving our way of life. Though I don't use this blog as a forum for political stuff, I am a veteran (U.S. Army, 1990-'92) and have a very strong feeling that anybody who willingly spends part of his or her life handing a blank check to the U.S. Government for any amount up to and including their life should be given their due.


So today's card shows a player who not only served his country during wartime but carried a physical reminder of that service with him: 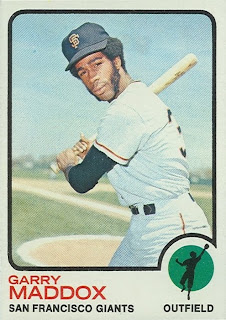 Card #322 -- Garry Maddox, San Francisco Giants
This is Garry Maddox's first appearance on a Topps baseball card. However, before he ever wore a major league baseball uniform, he wore an olive-colored uniform for the U.S. Army for 1970-'71 and was sent to Vietnam. While over there, he was exposed to chemicals which made his face sensitive. As a result, he wore a beard to protect his face. While the photo on the card shows that he was shaving some around 1972, Maddox soon grew a full beard and keeps it to this day.

Like many former soldiers who brought their wartime experiences back home, Maddox went back to the job he was doing before his draft number came up. From 1972-'75 he roamed centerfield for the Giants until he was dealt to Philadelphia. With the Phillies, Maddox became a tremendous asset. He won the first of his eight Gold Glove awards that year and helped the team as it rose from its two-decade slump to become a solid contender in the late 1970s. In 1980, he helped win the pennant with both his bat (a 10th-inning single that scored the winning run of the deciding game against the Astros) and his glove (by catching the final out of the NLCS). He would retire in 1986 after five division titles, two pennants and the 1980 Series title. He's still active around Philadelphia.

While doing some research, I discovered Maddox was named to the 1972 Topps All-Star Rookie team, but was one of four players whose trophy was left off the card.

So, this Memorial Day, remember those around you who've spent time in uniform. While it's a day where we generally remember those who never made it back home, there's no problem with showing appreciation to those who did.
Posted by Chris Stufflestreet at 8:30 AM