One of the neat things tried in the 1973 Topps set was the team manager cards. While managers normally had their own cards during the late 1960s and early '70s, for 1973 they were joined by their coaching staffs. While not entirely new (Topps had cards of team coaches in 1960), the coaching staff had never shared a card with the skipper on a Topps baseball card before. 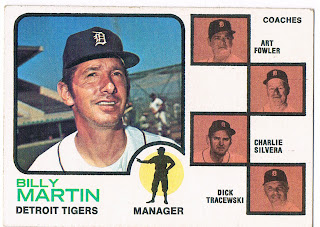 Card #323, Billy Martin, Detroit Tigers
Here's a picture of Billy Martin standing in front of a batting cage. The player behind him is fuzzy but appears to be wearing a Yankee home uniform. This time Topps was smart enough to show Martin from the neck up after he slipped in a middle finger on his 1972 card.

Of course, Billy Martin's coaching staff wouldn't be complete without his ever-present pitching coach Art Fowler. Charlie Silvera was one of his Yankee teammates in the 1950s, while Dick Tracewski had been a Tiger player until he retired in '69 and began a second career as a coach. All three of these coaches are still alive as of this writing.

But wait...something's not right. The coach with the missing name is Joe Schultz. He had played parts of nine seasons between 1939 and '48, mostly with the St. Louis Browns. Schultz came from a baseball family, with his father (also named Joe Schultz) playing from 1912-'25 and two cousins, Frank and Hans Lobert, also playing during the pre-World War One era. Schultz would be the first and only manager of the Seattle Pilots in 1969 and would succeed Billy Martin in August of '73 as Tigers skipper.

Sadly, Schultz died in 1996. And Martin was killed in a pickup truck accident on Christmas Day 1989. It's rumored that he was preparing for his sixth chance at managing the Yankees.
Posted by Chris Stufflestreet at 8:30 AM