The Play at the Plate

One of the quirks of the 1973 Topps set's layout is the way some cards are oriented horizontally to accommodate the action shots the company hoped would breathe some life into them. Considering the bland presentation of many 1960s Topps cards -- especially those with capless players who looked more like your Uncle George than a professional baseball player -- anything that would mix it up was welcome.

However, the horizontal cards didn't always show the best sides of players. Some had several extra people, a lot of butt shots and occasionally the person whose name on the card was shown so far away you had to guess which one it was. Some of the shots turned out to be nice. Here's one of the good ones: 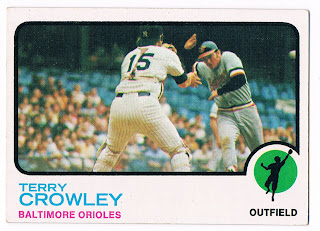 Card #302 - Terry Crowley, Baltimore Orioles
Terry Crowley is heading home. Waiting on the relay is Yankee catcher Thurman Munson. The ball can be seen on the right side of the picture and Crowley is clearly ready for a collision. You know it's going to be close and can't help but wonder who won the battle. Fortunately, there are websites that can help answer that.

Thanks to the magic of Baseball-Reference.com, it appears the picture was taken in a Yankees/Orioles game on June 29th, 1972. Since Munson is in pinstripes, it can be safely assumed the game was at Yankee Stadium. Crowley only played three games in New York that season and two of them ended without him reaching first. However, on June 29th he made three plate appearances, walking twice and scoring twice. If this info is correct, Crowley was likely safe at home on the play.

Terry Crowley was a pinch hitter utility player who took several positions, filling in wherever he was needed in the outfield or at first base. 1973 would be the last season in his first tour of duty with the Orioles. After playing in the 1975 World Series for the Reds and a half season in Atlanta, he was back with the O's in 1976 and played with the team through 1982.
Posted by Chris Stufflestreet at 8:30 AM