Despite having many current players to choose from, Topps also added some retired Hall of Famers as an "All-Time Leaders" subset. 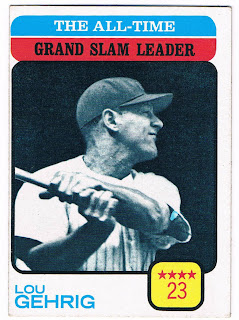 Card #472 - Lou Gehrig, All Time Leader
Look at that number for a moment. 23 Grand Slams. Twenty-three. Say what you want about the fact that Cal Ripken needed 56 years to break Gehrig's consecutive games mark, but the fact that nobody's been able to eclipse his grand slam record despite the fact that so many more balls seem to be traveling out of the ballpark nowadays is amazing. While it's possible to say his mark was helped by his years in the famed Murderer's Row and the fact opposing pitchers often had little choice but to pitch to him, 71 years holding an all-time standard is tremendous. Among active players, Manny Ramirez has 21 and Alex Rodriguez 18, so the mark may be within reach.

Among the All-time marks celebrated in the 1973 Topps set, many have fallen in the years since. While some may remain unbreakable due to changes in the game (Cy Young's total victories, Ty Cobb's lifetime batting average) it's interesting to see one still around that many have likely assumed had long since fallen.
Posted by Chris Stufflestreet at 8:30 AM