Sometimes an action shot shows a lot more than it really needs to. 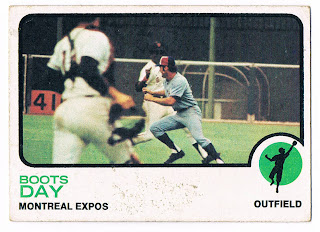 Card #307 - Boots Day, Montreal Expos
Looks like Boots is caught in a rundown between two Giants. The catcher appears to be Dave Rader and the infielder is Giant second sacker Tito Fuentes. But wait...is Fuentes flipping Day off? It certainly looks like it.

Since Boots day is wearing an Expos road uniform, we know the picture was taken at San Francisco's Candlestick Park. Thanks to Baseball-Reference.com, we know that Day only played in five games there in 1972. And on June 29, he was caught stealing in the seventh inning. Looks like Fuentes was letting him know  -- without having to worry about whether it needed to be in French, English or Tito's native Spanish -- that Boots Day is #1 on his list. And that he's out.

Lastly...check out the old batting cage in the background. That's the thing that looks like a cross between a kids' jungle gym and the front of a B52 bomber. I was watching the Billy Crystal-directed film 61* the other day. At the first part of the movie, the characters playing Mickey Mantle and Roger Maris (Thomas Jane and Barry Pepper) were taking their shots at batting practice under a canopy that looked exactly like that one.
Posted by Chris Stufflestreet at 8:30 AM