How big was Dave Kingman? Nicknamed "King Kong" and standing 6' 6", it's a given he was a big man...but look at the picture on his 1973 Topps card and you can't help but wonder just how big: 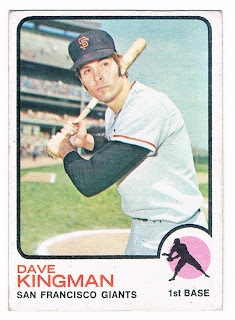 Card #23 - Dave Kingman, San Franciso Giants
For a man who was well-known for swinging a big bat, the one in this picture certainly looks really small in his hands. Perhaps it's merely an optical illusion.

Kingman had started out as a pitcher but converted to a position player during his college years at USC. 1973 saw Kingman take the mound for the Giants twice, finishing both games. 1977 saw Kingman play in all four divisons in Major League Baseball. His home run totals actually improved as he got older; in four of his final five seasons, he hit at least 30 round-trippers. However, he was also striking out an awful lot. Pitchers were obviously taking their chances with him but he had become a one-weapon player.

Though Kingman has his Cooperstown fan club, he was never considered a serious contender for the Hall of Fame. In fact, he became the first-ever player with more than 400 lifetime homers to be denied induction.
Posted by Chris Stufflestreet at 8:30 AM