With those nicknames, they could've been a couple of bandits on horseback in the Old West of 1872. However, they're the pitchers who won league ERA titles in 1972. What a difference one hundred years makes.

Today's featured card from the 1973 Topps set is from the subset of league leaders. Two of the better pitchers I remember from my youth are featured together: 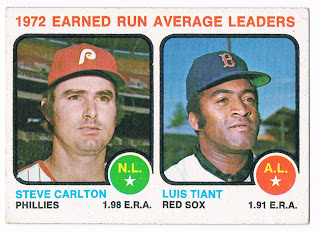 Card #65 - 1972 ERA Leaders (Carlton, Tiant)
Steve Carlton had a phenomenal 1972 season. Going 27-10 is amazing, but winning 27 games for a last-place team that only won 59 all season is even more of a feat. As a way of understanding how overpowering he was that year, he led the National League in complete games (a lost art in today's game), strikeouts, innings pitched and ERA. Baseball-Reference shows he actually had a 1.97 ERA that year, so perhaps there was a revision to the record or Topps' calculator didn't carry a number over. Plus, he walked only 87 batters in his 346 and 1/3 innings that year, an average of about one every four innings. He certainly deserved his first Cy Young Award that year.

As for Luis Tiant, his season wasn't as huge as Carlton's, even though he had a better ERA. Splitting the season between the BoSox rotation and the bullpen, he was a big performer on a team that was in the pennant race to the end of the season (the Sox lost the division to the Tigers by only half a game). Throughout 1972, "El Tiante" was en fuego, ending up as the only Red Sox pitcher with an ERA below 3.00.

Most pitchers consider a sub-3.00 ERA to be an achievement, so the final tallies shown here are quite impressive. What's even more impressive is the fact that since 1972, there has never been a season where both league leaders have ended up with ERAs below 2.00.
Posted by Chris Stufflestreet at 8:30 AM