Joe Niekro was more than just the little brother of Hall of Fame pitcher Phil Niekro. He was a solid pitcher in his own right, winning 221 games over a 22-season career. The knuckleball-throwing brothers won a combined 539 games, making them the brother tandem with the most wins in major league history. From 2003-'07, his son Lance Niekro played for the San Francisco Giants.

Here's the younger Niekro brother posing for the Topps photographer: 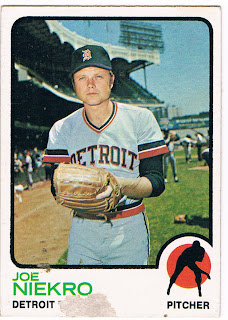 Card 585 - Joe Niekro, Detroit Tigers
Yes, the word "Tigers" is missing from my card, along with a nice chunk of the paper. The team designation wasn't needed for long though, because Joe joined his brother in Atlanta that summer when the Braves picked him up on waivers. Not surprisingly, the image was taken in New York, Topps' home city. The picture is a nice shot of the old upper deck facade at Yankee Stadium before it was removed in the 1974-'75 renovation.

One of my favorite Joe Niekro facts: he hit the only home run of his big league career on May 29, 1976. The blast came off his brother.