Last time,I showed a card that was supposed to show Joe Rudi but ended up featuring Gene Tenace. This time, the card still shows the A's catcher but at least he gets credit: 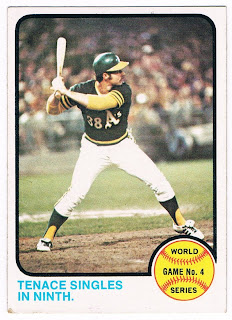 Card #206 - '72 World Series, Game 4
This card is from the postseason subset that covers both leagues' Championship Series and the World Series. Right there in blue Helvetica font, the card mentions that Tenace hit a single in the fourth game of the World Series. However, it really doesn't cover the importance of that single. Fortunately, there's Baseball-Reference.com to fill in the details.

It was the bottom of the ninth. Reds are winning, 2-1. Gene Tenace comes to the plate with one out and pinch hitter Gonzalo Marquez had just gotten a single. As Tenace made his way to the plate, Sparky Anderson pulled Pedro Borbon for Clay Carroll. All Carroll needs is a ground out and the game is over. Instead of the hoped for groundball, Tenace lines the ball to left and gets aboard. Two more pinch hitters come through for the A's. Don Mincher replaces Dick Green and hits another single, scoring the runner from second, and is himself substituted for "Blue Moon" Odom to pinch-run, while Angel Mangual pinch-hits for pitcher Rollie Fingers and hits a ground ball. As Tenace steps on home, the A's have won the game in dramatic fashion and take the Series lead 3-1.
Posted by Chris Stufflestreet at 8:30 AM