Playing in a Used Car Lot?

One of the charms of the 1973 Topps baseball set is the fact that so many cards are oriented horizontally to accommodate the action shots the company used that year. While many of the long shots showed too many people, sometimes they would show too much background. Take this card, for example: 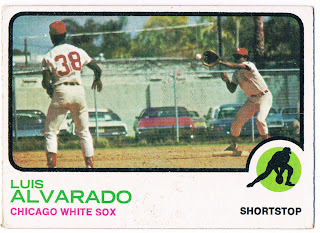 Card #627 - Luis Alvarado, Chicago White Sox
From the way the dirt shows up at the bottom and little grass is seen, it almost appears a couple of guys are playing a pickup game on a municipal dirt lot or some clearing next to a parking lot. You can't help but love the way all those cards are American gas-guzzlers back in the days before the Oil Embargo and the coming energy crisis. This was Alvarado's fourth Topps card out of five and his second straight in the high-numbered series. He played parts of nine different seasons between 1968 and '77 for six different clubs. As a utility infielder, he was often called in to games to give the starter some rest. Sadly, Alvarado passed away in 2001 in his hometown of Lajas, Puerto Rico. He was 52.
Posted by Chris Stufflestreet at 8:30 AM