Checklists are often one of the poor castoffs from the cards put out each year. Though technically a part of the set with their own card numbers, they're either used for their intended purpose -- keeping track of which cards the owner has from the set -- or often tossed away. They usually don't show players, they're often dull and nobody ever wants to trade them for anything decent. Look at this poor card, for instance: 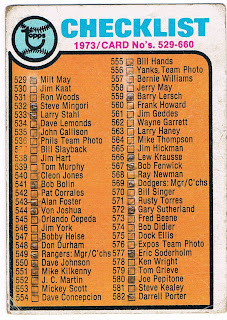 Card #588 - Checklist 5
I'm guessing its original owner was doing a lot of trading. While some of the boxes have been marked, others have been erased, indicating that the card was no longer in that collector's possession. In my case, the marks were fortunate (I ended up getting a great deal on the card since it was damaged) but it shows some of the abuse checklist cards received at the hands of those who wanted nothing more than to mark them up.

Actually, I'd assume that a checklist with all the boxes filled in would be a sign that the collector was happy indeed, as he (or she) had finished the series. That's why this card seems to be so sad...the collector never completed it. Fear not, little fella...you and your other 659 buddies are all back together in my binder, and I'm not going to subject you to any more ink stains.
Posted by Chris Stufflestreet at 8:30 AM

Email ThisBlogThis!Share to TwitterShare to FacebookShare to Pinterest
Labels: checklist