Yesterday, When I Was Young

I featured a Jim Palmer card from the Boyhood Photos subset a little while back. In that post I mentioned how that photo from his youth didn't show him playing baseball, which seemed strange on a baseball card. There was one player shown in his boyhood uniform, though: 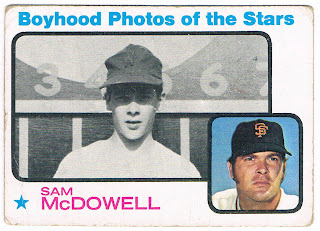 Card #342 - Sam McDowell, Boyhood Photo
Sam McDowell was the very first player I featured on this blog. He was winding down his major league career in '73, so the before/after pictures are quite a contrast.

The back of the card mentions that Sam began playing baseball as an outfielder, but was converted to pitcher once his arm power was discovered. That was a better deal than my own switch from outfielder to pitcher during my Little League days. However, in my case, I was brought in because I fielded fly balls as if they were live grenades.
Posted by Chris Stufflestreet at 8:30 AM