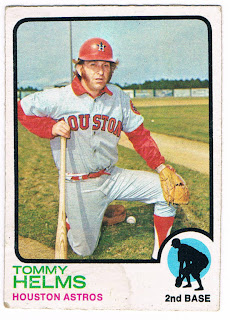 Card #495 - Tommy Helms, Houston Astros
Look past that gray Astros road uniform, which was one of the blandest in the majors. Look past those mutton chop sideburns running down his face. Look past the glove and ball laying on the ground but positioned in a way to invite unfortunate jokes at Helms's expense.

However, standing on the sidelines with a bat and a glove? Nice way to show you have no confidence in the guy at bat. That said, Helms was one of the hardest players in the game to strike out. In nearly 5,000 at-bats during a 14-year career, Helms struck out 301 times. As good as he was, the Reds still traded him to Houston as part of the deal that got them another second baseman, Joe Morgan.

Helms also replaced Pete Rose in two different ways. First, he was part of a position change the Cincinnati Reds made in 1967. Tony Perez was shifted to third base, while Holmes (the third baseman) was placed at second. He took the position from Rose, who went to the outfield. After Helms retired, he would join his old teammate when Rose became player/manager of the Reds in 1984. When baseball's all-time hit king was banned from the sport in 1989, it was Helms who took over at manager for the remainder of the season.
Posted by Chris Stufflestreet at 8:30 AM