There were three Alou brothers in the major leagues during the 1960s and '70s. All three appear in the 1973 Topps baseball set, and here's the first to appear on this blog so far: 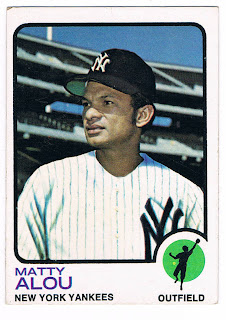 Card #132 - Matty Alou, New York Yankees
Matty was the middle brother of the trio. The photo is obviously airbrushed: not only is he wearing a Yankees home uniform but obviously not at Yankee Stadium (seen on many other 1973 Topps cards), the interlocking "NY" logo on his chest is way too large and doesn't match the wrinkles on his uniform. The logo on the hat's also way too large.

Alou is shown airbrushed here because he had split the 1972 season between St. Louis and Oakland before being traded to the Yankees in the offesason. He would finish the '73 season with St. Louis again. In 1974, he would play for the Padres but released a couple of months into the season and finished his career with three seasons in Japan.
Posted by Chris Stufflestreet at 8:30 AM