While the tilt of the field on the card may say "1970s substance abuse issue," the Atlanta Braves uniforms exemplified the times as well. From the shade of blue to the Indian feather on the sleeve to the red lower-case letter "a" on the cap, they were a product of their times...more colorful than the staid uniforms the team brought with them when they moved from Milwaukee, yet louder than the more conservative threads Ted Turner gave them as he began calling them "America's Team" on his TV station during the 1980s. 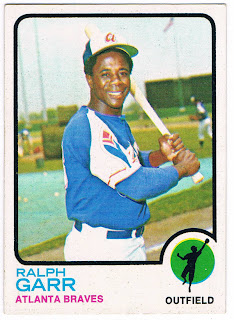 Card #15 -- Ralph Garr, Atlanta Braves
While it can be safely assumed that a man nicknamed "Road Runner" would be fast, Ralph Garr was also a good hitter during the early 1970s. From 1971-'75 he was among the top 10 hitters in the National League five times, winning the '74 batting title. He could hit to all fields as well, which made it hard for opponents to defend against him when he walked to the plate. His speed also helped him stretch hits; he led the league in triples during both 1974 and '75.

Then, after the 1975 season, Garr was traded to the White Sox. Although he still managed to hit .300 during his first two years there, his speed wasn't as evident. Fortunately, the American League was more of a hitter's league so he fit right in. As his abilities began to fade with age, Garr would end up in California at the end of the 1978 season. He remained with the Angels until 1980.

He retired with a lifetime .306 batting average. Not bad for a guy remembered for his speed on the bases, even if he never did win a stolen bases award during his career.
Posted by Chris Stufflestreet at 8:30 AM