Here is a player who was popular with the fans: 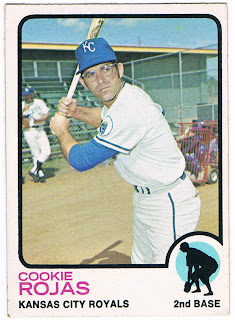 Card #188 -- Cookie Rojas, Kansas City Royals
Here he is at Spring Training, surrounded by equipment. Check out the player in the background, resting against a chain-link fence.

His given name was Octavio Victor Rojas Rivas...but fans simply know him as "Cookie."

Though signed in 1956, he wouldn't make it to the big leagues until 1962, when he played for the visiting team in the first game ever at Dodger Stadium. His tenure in Cincinnati that year was short; after 39 games and a return to the minor leagues, he was dealt to the Phillies. With the Phillies, Rojas filled in wherever he was needed on the field and finally secured the staring position at second base by 1965. His double-play tandem with shortstop Bobby Wine was often referred to as "The Days of Wine and Rojas."

(For those who didn't know..."The Days of Wine and Roses" was a popular song by Henry Mancini in the early 1960s, and the theme to a film of the same name. I'm mentioning that since the history of popular music of the 1960s is often sparse in the history books before the arrival of The Beatles.)

Rojas' offensive numbers were falling by 1969, so the Phillies sent him to the Cardinals as part of the deal involving Dick Allen and Curt Flood that led to free agency. He struggled in St. Louis and would get traded to the Royals in June 1970. The veteran was able to become a leader quickly in Kansas City, holding down the post at second for the next several years and representing them in the All-Star game every year from 1971-'74.

In 1976, he lost his starting job to Frank White, who is still the only Royal to play more games that Rojas at second base. After two years as a utility player, Rojas signed with the Cubs in '78 but never played in a game for them. After his retirement, Cookie Rojas was a coach and manager at the big-league level, and eventually moved into the broadcast booth. He's currently handling the Marlins' Spanish-language telecasts.
Posted by Chris Stufflestreet at 8:30 AM