This is a posed photo, but this player really looks like he's enjoying the fact that he's able to wear a big league uniform: 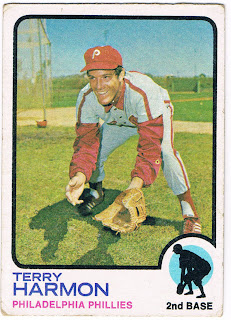 Card #166 -- Terry Harmon, Philadelphia Phillies
Terry Harmon was a career Phillie, spending 1969-'77 with the team (as well as a two-game trial in '67). Although he was a utility infielder during that time -- he never played more than 87 games in a single season -- he was considered helpful enough to stay with the Phils as they rebuilt from the team with the worst record in the National League in 1972 to a regular contender later in the decade.

Harmon is shown here with his glove, which is appropriate. Though he was able to play capably at every infield position, he occasionally flirted with the Mendoza Line in his career and amassed four home runs in his career. And that's because he had a power surge in his final season and cranked out two of them.

Since retiring, Harmon has been dabbling in TV. He was a broadcaster at a local Philadelphia cable sports station and eventually moved over to sales.
Posted by Chris Stufflestreet at 8:30 AM