Star Player...But Not Quite Immortal

Before this player passed away from a stroke in 1995, there was a push by several fans to get him enshrined in the Hall of Fame: 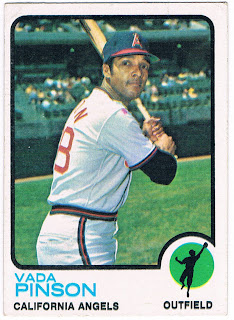 Card #75 -- Vada Pinson, California Angels
However, 2,757 hits and 485 doubles aren't numbers that will cement induction. That said, Pinson remains eligible through the Veterans' Committee and can conceivably get a plaque in Cooperstown someday.

Before I get into a recap of Pinson's career, I will point out the way the field is tilted in the picture on his '73 Topps card. That and the small turnout for the game (though the photo could have been snapped before the game, even if it doesn't look like there are any fans walking toward their seats).

A graduate of McClymonds High School in Oakland, he was a teammate of Frank Robinson. Pinson joined Robinson when he came up with Cincinnati in 1958. He remained with the Reds until 1968 and had his best years with that club. In 1961, he was the runner-up for the National League batting title as he helped the Reds to the World Series. Batting ahead of Robinson early in his career and behind Pete Rose later on, he got a lot of good pitches and took the opportunity to rack up the runs and RBIs.

In 1969, the Reds traded Pinson to the Cardinals, but his season was disappointing. After that, he would spend two seasons with three different clubs: Cleveland, California and Kansas City. Even toward the end of his career, he was still able to play over 100 games a year and wasn't relegated to the DH position to get a bat into the lineup. He was still able to capably play in the field, and filled in wherever he was needed.

After retiring, Pinson became a major league coach with the Mariners, White Sox, Tigers and Marlins. Though efforts to get him into Cooperstown failed (and then cooled off after his death), Vada Pinson was still one of the most exciting and productive batters of the 1960s.
Posted by Chris Stufflestreet at 8:30 AM