A Cup of Coffee, But Still Holds a Distinction...

Here's another card that was given the airbrush treatment: 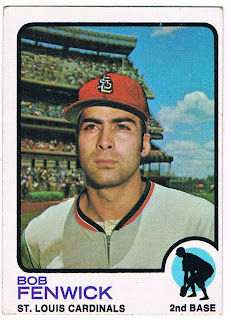 Card #567 -- Bob Fenwick, St. Louis Cardinals
In 1972, Bob Fenwick played with the Houston Astros as a utility man. The card mentions on the back that he had been traded to the Cardinals during the offseason.

Incidentally, but the time this card appeared in the later series wax packs, his major league career had ended. He played his final game on May 8, 1973 and spent the rest of the season (and all of '74) in the minor leagues. He actually changed team affiliations three times in 1973.

One interesting bit of trivia: Fenwick was born in Okinawa in 1946 while that island was under American military occupation. He's the only major leaguer with that distinction.
Posted by Chris Stufflestreet at 8:30 AM