I've mentioned before that 1970s style is sometimes unintentionally hilarious because of the way its proponents dropped them later on. Long, unwashed hair. Bell-bottom pants. Plaid shirt patterns. Earth shoes. And -- on display here -- the long "mutton chop" sideburns: 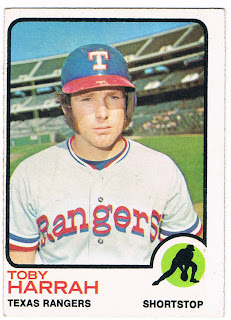 Card #216 -- Toby Harrah, Texas Rangers
Plus, I like the fact that his last name is a palindrome.

In 1986, Toby Harrah was the last active major leaguer who had played with the Washington Senators. He first came up with the Senators in 1969 and moved over with the team to Texas in 1972. He remained with the organization through 1978, when he was traded to Cleveland for Buddy Bell. After five seasons with the Indians, he went to the New York Yankees as a platoon player in 1984. He then returned to the Rangers (and a full-time role) for two seasons.

Harrah was the last player to see a pitch as a member of the Senators. He was standing at the plate when Tommy McCraw was thrown out trying to steal in the bottom of the eighth. There was no bottom of the ninth...after the team's fans trashed the field before the game was official and caused a forfeit to the Yankees.

Harrah also participated in two trivial oddities during the 1970s. In 1976, he played an entire doubleheader without taking a single chance. That is a really big deal, considering the fact that he was a shortstop. In 1977, he and Bump Wills hit back-to-back inside-the-park home runs. That has never happened before or since, even in the "dead ball" era when heads-down baserunning was the style.

After retiring, Harrah was the Rangers' manager for the second half of the 1992 season. He is currently a hitting coach for the Detroit Tigers.
Posted by Chris Stufflestreet at 8:30 AM