Sparky Lyle had a lot of things to say about his teammates when he wrote The Bronx Zoo in 1978 with Peter Golenbock. Many of them weren't complimentary. About Roy White, he said: "Roy White is probably the nicest...guy on the club. He's quiet. He's well respected by everybody, and he's very classy." In a book that is lauded as a tell-all account, that's no faint praise. 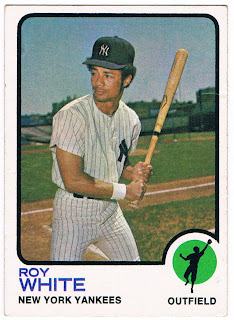 Card #25 -- Roy White, New York Yankees
Fans loved Roy White in New York. He was one of the few Yankees from the pre-Steinbrenner  era who were allowed to stick with the club for years afterward. He didn't bother getting cute quotes to the writers, never demanded to get put into a better lineup position, he just went out to left field and did his job.

White came up to the Bronx in 1965, an era where the Yankees had appeared in the previous five World Series and fifteen out of the previous eighteen. He probably figured it would be a matter of time before he got the chance to play in the postseason, but it ended up turning into a twelve-year wait. He won his Series rings in 1977 and '78 and played for the Yankees through 1979.

He then went to Japan and played for the Yomiuri Giants for three more years, where he played alongside Sadaharu Oh. After hanging up his cleats, he became a coach for the Yankees (three times) and several other teams.
Posted by Chris Stufflestreet at 8:30 AM