I was too young to collect cards in 1973 (I actually started in 1979), but if I had, this player's name would have brought out the inner voice of that 14-year old that still lives inside me: 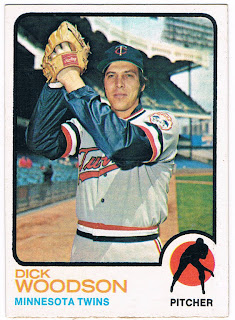 Card #98 -- Dick Woodson, Minnesota Twins
He is standing in front of the unmistakeable facade of the old pre-renovated Yankee stadium in this photo. In 1974, he played his last major league home games there.

In May of '74, he was traded to the Yankees, where he returned to a role of occasional starter/set-up reliever. By mid-season, he was once more in the minors. This time, he never made it back to teh parent club, and was done after the 1975 season.
Posted by Chris Stufflestreet at 8:30 AM