At the time this picture was taken, this pitcher was part of the rotation but would soon transition to the bullpen: 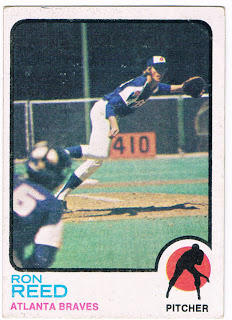 Card#72 -- Ron Reed, Atlanta Braves
In this photo, Ron Reed's delivering a pitch to Braves catcher Paul Casanova. He looks like he's about to fall down (or is that from the tilt of the field?).

From 1966-'75, Reed was a starting pitcher for the Braves, continuing in that role for the Cardinals for the rest of '75 after being traded. After that season, he was traded to the Philadelphia Phillies and moved into a new role as a reliever. He became renowned for being a tough pitcher to hit a home run against, and was a regular in the postseason during his 1976-'83 tenure with the team. He would get in one last season with the White Sox in 1984 before retiring.

In addition to being one of only eight major league pitchers to notch both 100 career victories and 100 saves, Reed was a two-sport star early in his career. After starring in both baseball and basketball at Notre Dame, he played on the Detroit Pistons in 1965-'66 and 1966-'67 during the off-seasons.
Posted by Chris Stufflestreet at 8:30 AM