A Free Swinger...But a Tough Out

In 1968, this player was picked by the New York Mets as the first overall draft pick: 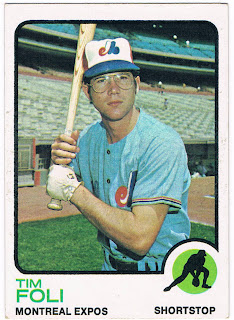 Card #19 -- Tim Foli, Montreal Expos
Tim Foli was known for being a fiery player, with a temper to match. He was also known as a tough player to strike out. However, he was a free swinger who was able to put the ball in play (he rarely walked) but had very little power. As the picture on the card shows, he would choke up on the bat, which was unusual for the era. He was also known for his skill with the glove, which allowed infielders to stick around in those days.

Foli was a well-traveled player, spreading his career over sixteen years and six different clubs. It was with the Expos that he spent the longest tenure, from 1972-'77. He was popular with the fans in Montreal, but his anemic hitting saw him traded to the Giants. In '78, he was a regular for his original team (The Mets), who had the worst record in the National League. He would get traded to Pittsburgh three games into the 1979 season, and he won his only Series ring that year.

In 1981, we was traded to another contender in California, who went to the ALCS. After one more season with the Angels and another with the Yankees, he finished up in Pittsburgh in 1985. He became a coach after his playing days were over, as well as a minor league manager. In those capacities, he was still a fiery competitor. Age didn't mellow him at all.
Posted by Chris Stufflestreet at 8:30 AM