Back when I was in the Army, recruits with long or hard-to-pronounce last names (like mine) were often referred to as "Private Alphabet" by our drill sergeants and other NCOs. That has absolutely nothing to do with this player except he'd have been called that as well: 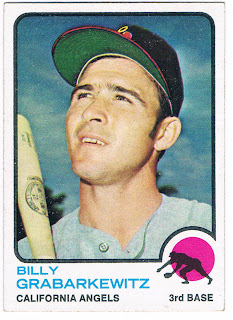 Card #301 -- Billy Grabarkewitz, California Angels
If it appears the partial Angels log is airbrushed, that's because Billy Grabarkewitz had spent his entire major league career through 1972 as a member of the Los Angeles Dodgers. Topps didn't have a lot of time to get a picture of him in an Angels uniform, as he was traded to Philadelphia that August. He never spent another full season with another team, splitting '74 with the Phillies and Cubs and getting into six games with the A's in 1975 before being sent down to the minors. He was released after the season and never played again.

Grabarkewitz was a skilled infielder, but there was nowhere to put him when he was a Dodger, not when they were putting together their fabled Garvey/Lopes/Russell/Cey lineup. He made the All-Star team in 1970. However, injuries nagged him and affected his performance after that. As it turned out, 1970 would be Grabarkewitz's one shining year in the majors.

He went into the insurance business after putting away his glove.
Posted by Chris Stufflestreet at 8:30 AM