The entire starting infield of the Baltimore Orioles was showcased in 1973, as Topps gave them all action shots on their cards. For Andy Etchebarren, however, the picture shows him taking a swing before a road game: 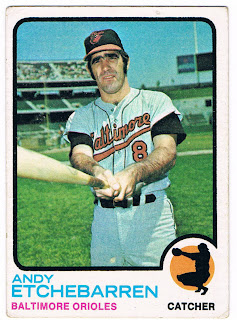 Card #618 -- Andy Ecthebarren, Baltimore Orioles
Andy Etchebarren was the last major leaguer ever to bat against Sandy Koufax. It was during the 1966 World Series, and he hit into a double play to end the inning. The Orioles swept that series, giving him the first of his two rings.

During Earl Weaver's tenure with the team, he and Elrod Hendricks teamed up in a platoon system that helped the O's staff become one of the most dominant in the majors. His influence helped four pitchers (Jim Palmer, Dave McNally, Mike Cuellar and Pat Dobson) win 20 or more games in 1971, as well as helping his team capture five of the first six American League East divisional titles.

Unlike many who played his position, he was a catcher for every game he played as a major leaguer. His career batting average was low, but he was noted for his patience at the plate, having a much higher on-base percentage than a .235 career hitter would be expected to have.

The California Angels acquired Etchebarren before the 1975 season and he spent three years there and a short four-game stint with the Milwaukee Brewers in 1978 before embarking on his next career. By the end of his time with the Angels, he was a player-coach, and continued coaching with the Brewers. He moved his way up the organization and eventually became a bench coach for the team under Tom Trebelhorn. He became a minor league manager in the 1990s and is still managing in the Independent League today.
Posted by Chris Stufflestreet at 8:30 AM