Last week was Rosh Hashanah, which is the Jewish New Year. Later this week, Yom Kippur is celebrated. What better time to feature a player who was nicknamed "Superjew"?

I started collecting baseball cards in 1979. It wasn't until 1984 that I'd worked my way back to the 1973 Topps set, but this was one of the first cards from the set I ever owned: 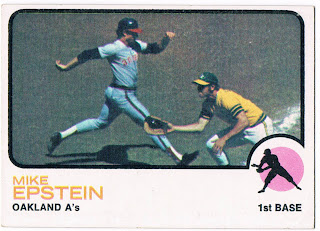 Actually, it wasn't this card. I've updated that original, which had several creases on it and a water stain. It's a great picture, showing Mike Epstein waiting for the throw from the pitcher to hold Jim Spencer on first.

Born in the Bronx, raised in Los Angeles and an alum of Berkeley, Epstein came up with the Baltimore Orioles in 1966. Since the O's already had Boog Powell handling the first base duties, they tried to convert Epstein to the outfield. It didn't work, and he was traded to the Senators in '67. The first time he faced his former team, he hit a grand slam against them. His finest season was probably 1969, under the tutelage of skipper Ted Williams. He was traded to the A's early in the 1971 season.

In 1972, he was a member of the World Series champions. During the last half of the season, he wore a black armband to remember the Israeli athletes slain during the '72 Munich Olympics. Teammates Ken Holtzman and Reggie Jackson also donned armbands that season. After the season, he would be traded to the Rangers.

Early in the '73 season, Epstein was traded to California, where he would wrap up his career in 1974.

While known for his power, Epstein was also good at getting on base despite his low batting average. He walked or was hit by pitches often enough to have an OBP more than 100 points higher than his career average.
Posted by Chris Stufflestreet at 8:30 AM