In 1973, this player was a year away from securing the starting third baseman position for the Twins: 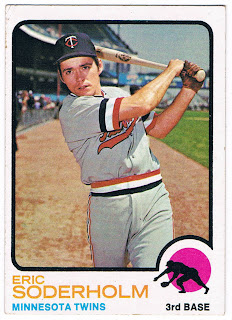 Card #577 -- Eric Soderholm, Minnesota Twins
This is Eric Soderholm's first appearance on a Topps card, but he'd been with the club ever since a late-season call-up in 1971. In 1973, his time was limited as he was sent back down to the minors for more seasoning. In 1974, he was back for good. Unfortunately, a knee injury sidelined him for the entire '76 season.

Despite being out for that entire season, Soderholm tested the free agent waters that year and quickly signed with the White Sox. He responded with a career year in '77, which saw him win the Comeback Player of the Year award. In that campaign, he clubbed 25 home runs, with 16 coming after the All-Star break. He continued with the "South Side Hitmen" through 1979, when he was traded to Texas. He was a part-timer in Texas as well as an occasional DH, a role he continued in 1980 with the Yankees.

Soderholm would sit out the 1981 season and failed to make the cut with the Cubs in a spring training tryout in '82. He worked as a private hitting instructor after his retirement, running baseball camps with his name on them. He also ran a business that resold tickets for sporting events and entertainment venues.
Posted by Chris Stufflestreet at 8:30 AM