This pitcher won the American League's Rookie of the Year Award in 1968 while pitching fo rthe New York Yankees: 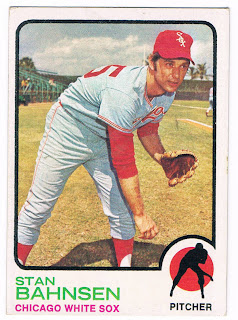 Card #20 -- Stan Bahnsen, Chicago White Sox
Stan Bahnsen almost didn't make the club that year. He arrived late for spring training because of a commitment to the Army. However, the Yankees were a shadow of their former selves and needed his services. He would go 17-12 and lead the team in ERA. However, the rest of his Yankee days were disappointing. His best known moment after his superb rookie season was an on-field brawl where the Indians' Vada Pinson floored him with a single punch.

In 1971, Bahnsen would be traded to the White Sox, where he would become part of a short rotation. In 1972, manager Chuck Tanner decided to go with Wilbur Wood, Bahnsen and Tom Bradley. The White Sox finished above .500 for the first time in years. In 1973-'74, he went with a rotation of Wood and Bahnsen, with his other starters filling in for them to give them an occasional rest. That old-school approach backfired, especially in the days where few paid attention to pitch counts. In 1973, he took a no-hitter into the ninth inning, only to have ex-teammate Walt Williams break it up with two outs.

In 1976, Bahnsen rejoined Tanner with the Oakland A's, then was traded to the Expos in 1977. He remained with them through 1981, with short stints in California and Philadelphia in 1982 before he retired.
Posted by Chris Stufflestreet at 8:30 AM