In celebration of the ongoing World Series, here's a card from the World Series subset of the 1973 Topps issue. It's one that actually has a great caption: 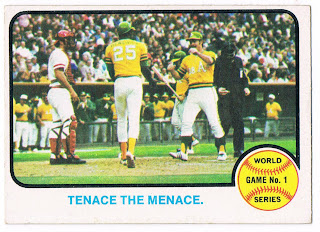 Card #203 -- 1972 World Series, Game 1
At Riverfront Satudium, Gene Tenace made major league history as the first player ever to hit home runs in his first two Series at-bats. Those two blasts scored three runs, which was enough to beat the Reds by a 3-2 score. Considering Reds pitcher Gary Nolan only allowed four hits (and the two relievers allowed none), Tenace made the difference at the plate for the A's.

The picture here shows Tenace celebrating after the first blast in the top of the second inning with George Hendrick, who also scored on the shot. Dick Green is getting ready for his appearance -- he would line out to third to end the inning -- and Johnny Bench waits to get back into position. The home plate umpire is Chris Pelekoudas, who appears to be trying to reset his device that counts balls and strikes. All this info can be found on Baseball-Reference.

The funny thing...Gene Tenace only managed 5 round-trippers all year and 20 in his four seasons up to that point. You can safely assume that his power display was a surprise to those watching. However, it would continue, as Tenace went on to get double-digit totals every year afterward until 1980.
Posted by Chris Stufflestreet at 8:30 AM