More "Catching" Up With the New Guys

It's been a longer time than I'd thought since there was a multi-player rookie card on this blog. The last one was in January! So, here's another one to make up for the wait: 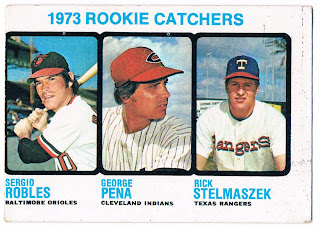 Card #601 -- 1973 Rookie Catchers
This is the fifth rookie card featured in this blog, and the fourth that has at least one player who'd already appeared on a Topps card before 1973.

This was Sergio Robles's first of two Topps cards. Thanks to Earl Weaver's platoon system of Andy Etchebarren and Elrod Hendricks in Baltimore, he only managed  two short stints with the team in 1972 and '73. He showed up again with the Dodgers in '76, but was quickly sent back to the minors. In 1977, Robles went to the Mexican League for a decade before becoming a manager there.

George Pena is definitely airbrushed into his Indians uniform on this card. As it turned out, it would be as close as he would get to the majors. He never rose above AAA and this would be his only Topps card.

Rick Stelmaszaek was already on a card in 1970. He had already had a short trial with the Washington Senators in 1971. When the team moved to Texas the next year, he remained in the minors. His stint with them in 1973 was a short one, since he was traded to the California Angels before this card could be placed into wax packs. At three seasons, he is the player on this card who had the longest major league career. He's the current bullpen coach for the Twins, where he has coached under five managers in 31 seasons.
Posted by Chris Stufflestreet at 8:30 AM